Half of yesterday was spent taping one segment of the stroll-around-Tokyo corner for the Saturday morning live TV Asahi show “Asanabi” (in English “Morning Navigator,” unfortunately not dubbed) which I appear on weekly. The corner is named  “Wabisabinabi,” which less the rhyme could be translated: “Navigating the Simple, Tranquil Corners of Old/New Tokyo.” Maybe that’s a little too much wasabi on the side, to make up for the lack of one good word in English to cover the old Japanese sense of  “wabi/sabi,” two words conflated to express a sentiment of cool, unadorned, shadowed-rather-than-florescent-in-your-face-consumerism, which a lot of post-bubble young Japanese people really appreciate these days (and has nothing to do withwasabi. Haha).

Yesterday’s outing took us up and down the old canals east of Sumida River, a sleepy residential/small-scale industrial corner of town largely forgotten until Tokyo Skytree opened in May (http://www.tokyo-skytree.jp/en/). Now the area swarms with young couples and families with kids and retirees in neat caps and strolling outfits.

But no one in boats! The area is laced with canals dug in the early to mid-seventeenth century as Edo (name for Tokyo pre-1868) grew and with it expanded a need for quick, secure transportation of goods and people in and out of the city up to the delta regions north. A lot of the canals survive, coated and walled-in with concrete from the 60’s, but still navigable. The water is clean enough for herons (white herons and ghostly grey herons or goisagi) and gaggles of ducks to gather, with tons of silver pampas grass for them to hide in at water’s edge, and fishing poles everywhere. Men mostly, women here and there would line the often sharp corners of the canals, each with his or her bucket of goby (haze) catch. Our ferryboat captain Takashi Hirayama, of Tokyo Canal Network, mastered the channels, and seems to know everybody working on barges by face if not by name.

The land east of Sumida River is basically zero feet above sea level – much lower than the River itself – so in order to enter the maze of canals your boat has to go through a lock. The main lock from the Sumida side is on Onagi River (a long, perfectly straight canal connecting two rivers). On the way in yesterday, we were the only ones in the lock, which drained out in an instant nearly two and a half meters of water before passing us onto the other side. Very exciting (you’d have to be there, or see the show). And kind of scary to think of what would happen if somehow the entrance gate behind us suddenly slid open with the exit gate shut, in reverse order. Of course that has never occurred. But you could almost feel the River pressing on the gate as we descended lower and lower into the canal.

My companions on this show are Shigeru, the leader and guitarist of a famous band here, and Mariko, an announcer at TV Asahi. More on them and “Wabisabinabi” to come. 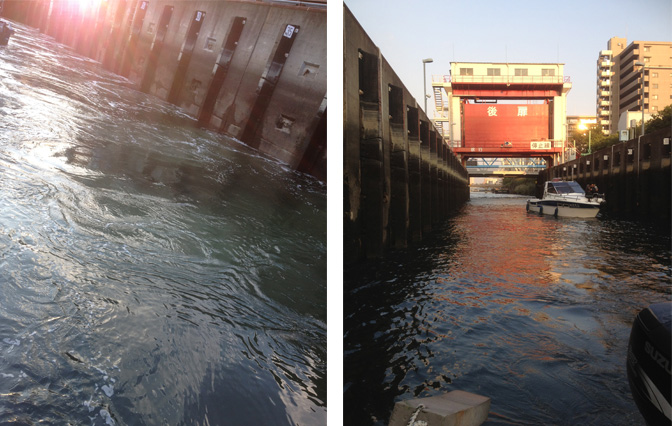